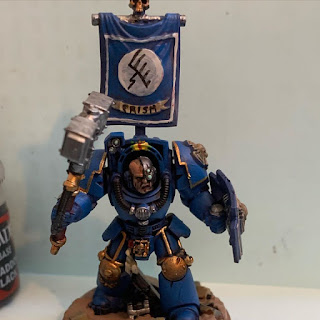 Posted by Spiderpope at 18:54 No comments:

It's been quite a while coming - since the release of Warhammer 40,000 8th Edition in fact! - but here's the first completed Primaris unit for my Rainbow Warriors! 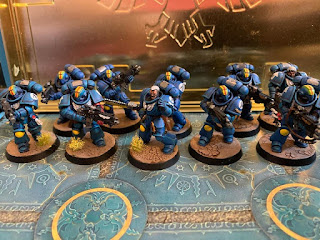 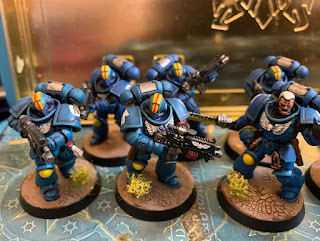 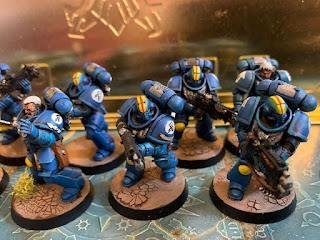 Posted by Spiderpope at 12:30 No comments:

Cabin Fever is definitely setting in

The UK, like many countries at the time of writing, is in the middle of a lockdown to try to slow the spread of Covid-19. I have to admit being stuck indoors is starting to get to me. Hence this: 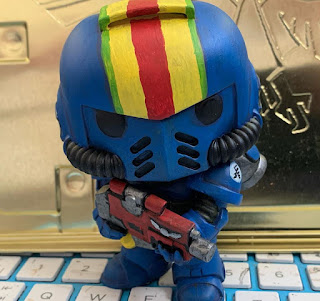 - Retconned Legion
Posted by Spiderpope at 16:24 No comments:

Brother Andus is part of Squad Ollan, the first squad belonging to the 2nd Company of the Rainbow Warriors Chapter. 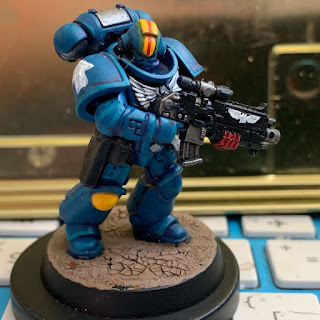 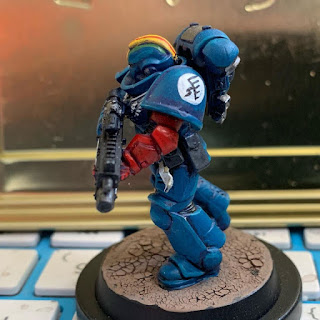 The red arm is an honorific amongst the Rainbow Warriors. It demonstrates that the wearer has served as Brother-Vermillion upon Holy Terra itself.

Andus is the first Brother-Vermillion i've painted for the Rainbow Warriors. Brother-Vermillions have each served upon Terra, guarding the Imperial Palace. They came about in my background to explain a particular piece of Rogue Trader era artwork: 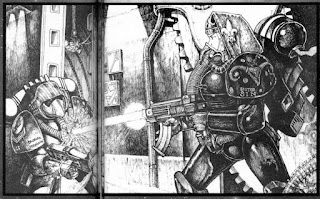 The artwork was intended as a pun by Games Workshop. Around the time of publication, the Greenpeace ship Rainbow Warrior had been sunk by the French. So the image shows a Rainbow Warrior being killed by a Sister of Battle wearing the Fleur De Lys.

So i wanted to come up with an explanation, beyond a Rainbow Warrior turning traitor. Which led to the Brothers-Vermillion.

A Brother-Vermillion is a Rainbow Warrior tasked with defending Terra. They forsake their typical blue heraldry for a more striking red, and stand guard on the walls of the Imperial Palace. The tradition came about in the dark years of the Scouring. As scions of the Ultramarines, the Rainbow Warriors were shamed by their absence during the Siege of Terra. Their first Chapter Masters swore that never again would the Emperor go unguarded by their lineage.
And so a single Rainbow Warrior is dispatched to serve upon Terra, standing guard until their replacement arrives from the Chapter.

In the artwork above, a Daughter of the Emperor, during the Age of Apostasy assassinates the serving Brother-Vermillion.

Explanation complete and i didnt even have to fall to Chaos!

Posted by Spiderpope at 17:06 No comments:

The Doctor, Apothecary of the Damned 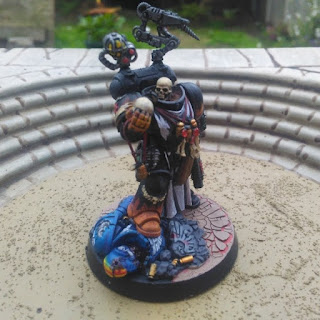 "If you think because she is dead i am weak, you understand very little. If you had anything to do with her death and are not afraid, you understand nothing at all. I am the Doctor, i'm coming to find you, and i will never, ever stop.''
- Unknown transmission, broadcast throughout the Trapp system after the Martyrdom of Saint Yenna

Another leader from the Legion, this time an Apothecary based on the Primaris kit. Once again this was a simple head swap with a skull. I also cut away the geneseed he was holding, to replace it with another skull, leaving him staring into it's sockets, peerhaps judging if it's owner is a worthy new recruit.

Duroc, Lieutenant of the Damned 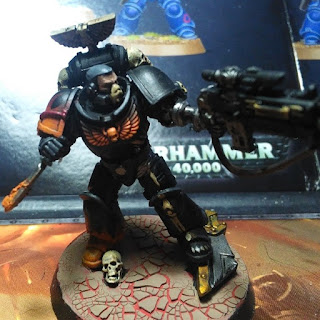 The first of my HQ's for the force, a converted Lieutenant for the Legion. Once again the components used were pretty simple. The bionic arm comes from the Hellblaster kit, with a simple handswap so he's wielding a Bolt Rifle. The head is from the same kit, and then it was just a matter of sculpting a little bit of flame on his combat knife with a blob of greenstuff.

This is the first completed squad for the army and was originally going to be the last. However because of the feedback i've received and how much i enjoyed painting them, they've now become my main project for the next few months.

I've begun work on a second squad and a Redemptor Dreadnought, plus a couple of characters to add to the army.

Posted by Spiderpope at 20:38 No comments: