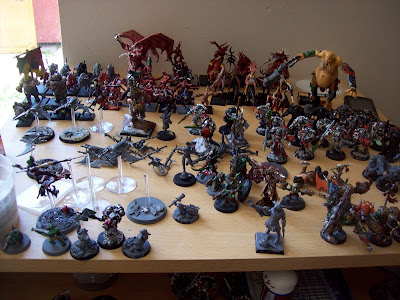 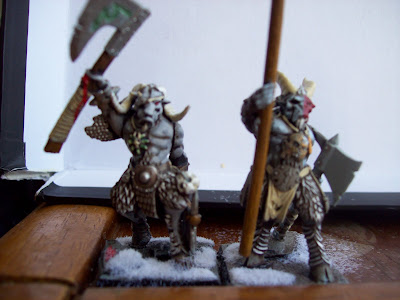 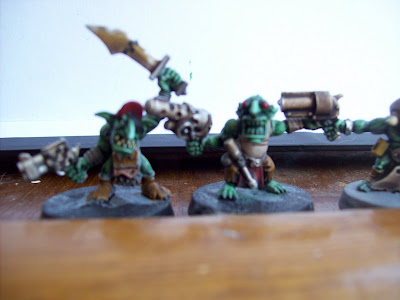 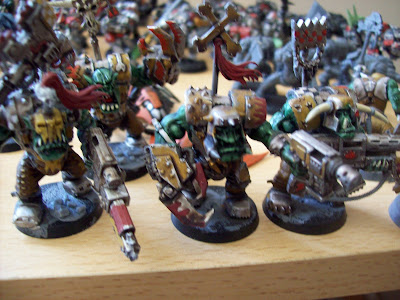 As promised in a previous blog update, i've uploaded a few pictures of my hobby progress during my online absence. First up is a picture of the current state of my work desk.
As you can see there are bits and bobs from half a dozen different armies currently decorating my living room and awaiting being finished. Alas my status as a hobby butterfly means that i rarely focus on one thing at a time resulting in it taking fething ages to get things finished.

Next up is a picture of a possible future Warhammer army for myself and the reason for this posts title. I bought a box of beastmen Gors several months ago and have been slowly, very slowly, working on them. They are an army i've not collected before so that was the main source of their appeal, combined with the brilliant portrayal of Beastmen in Robert Earl's Broken Honour (well worth reading).
I've also become a tad obsessed with basing my models with a winter theme, Beastmen included, so if i do go ahead with the full army it'll be winter based complete with dead trees etc.

The other newish army i've been working on are some Orks. I had an Ork army a few years ago and had to sell it because of real life financial reasons, much to my dismay. So i've been slowly starting again with my greenskins, using a new technique for their skin- I don't use any green paint at all.

No you arent colour blind, they are green but through repeated application of washes over grey. I highlight the grey before the wash which provides the skin highlights whilst giving them a slightly translucent look.


With all this talk of Beastmen and Orks you would be forgiven for thinking i've forgotten the Dark Eldar i was raving about not to long ago. Well that is and isnt true.

Whilst i love the miniatures themselves i've certainly struggled to give them a paint scheme and paint job that shows them at their best. I believe other bloggers predicted this when the range was released last year and i have to say i'm beginning to agree. This failure to find a decent scheme has meant that my Dark Eldar purchases have been somewhat limited, i've still only got 10 Hellions and 10 wyches, neither of which are finished.
I did however splash out on an Urien Rakarth model before giving up and got him mostly painted. 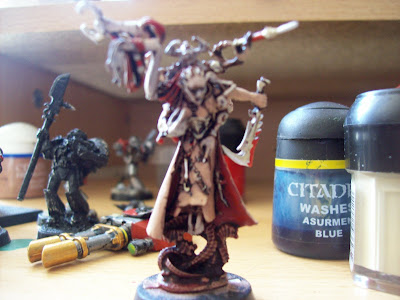 I've tried to give the impression that all his clothing and equipment has been fashioned from unfortunate victims, although the picture is a bit poor so thats not really clear (still experimenting with my camera alas). I like to think that Rakarths managed to keep his unwitting clothing alive and in agony.

Whether or not the Dark Eldar or Beastmen become a full army depends on whether i can resist the temptation to splash out on a bunch of Tomb Kings in the next week or so. The new statuary side of the army has really caught my eye and it's probably the first fantasy army to do so since i first started my Chaos Dwarfs sixteen years ago.
Speaking of which i've been drooling over the new Forgeworld chaos stunties, and they would almost certainly be my next purchase. But i'm having a hard time justifying to myself the £36 price tag for just 10 miniatures. They may look brilliant but at £88 for a regiment of 20 plus command the cost is just a bit too steep at the moment.

Thats all for now, i should have some more pictures uploaded in the not too distant future barring any cat related mishaps. 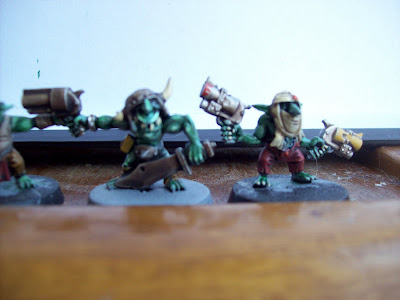